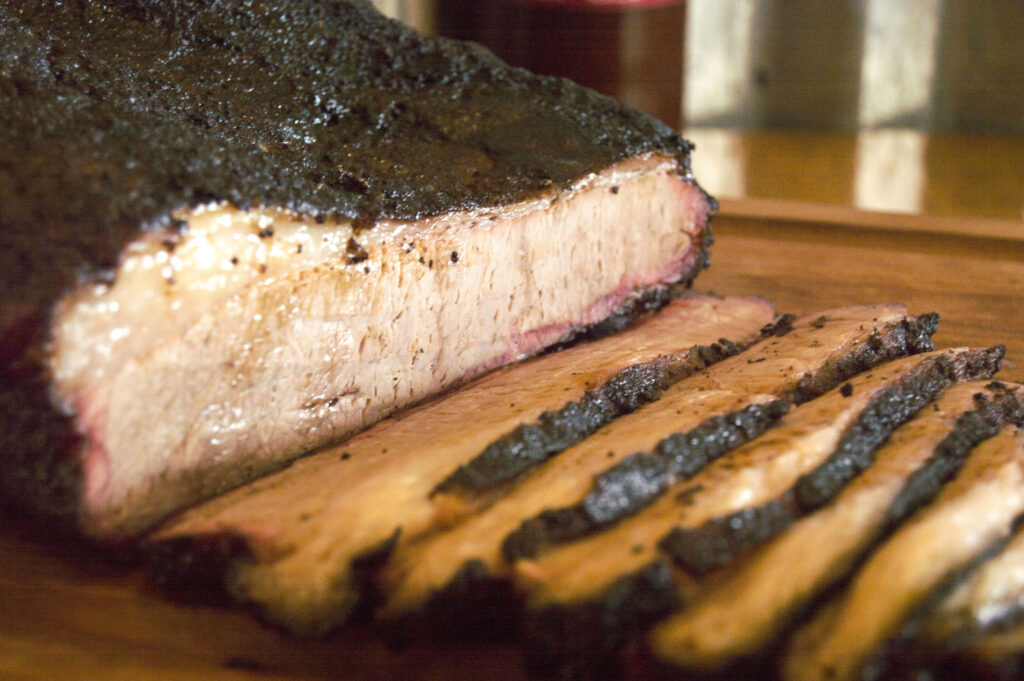 In the great state of Texas, brisket is considered the state’s “National Dish.” Brisket is a tough piece of meat and a challenge to cook unless it’s smoked “low and slow” – to the point that it falls apart, moist and tender.

At Smokey Mo’s, we’ve been serving it up just that way since we opened our doors in 2000. Our delicious meat is smoked for 10–12 hours and is packed with heat. We use combination wood and gas pits that help us keep consistent temperatures and moisture for tender, melt-in-your-mouth deliciousness.

Early cave drawings show that cattle have been consumed since prehistoric times. But beef consumption didn’t catch on until cattle were domesticated, beginning around 8,000 BC.

In 1534, Spanish explorers introduced cattle to America. Over time, beef edged out buffalo as the nation’s preferred meat. The brisket cut grew in popularity, as it was cheap and readily available – though tough to chew.

In Texas, immigrants and local ranchers experimented with preparation. They found that smoking the brisket with indirect heat, at low temperatures for long times, was the key to transforming tough meat into tender deliciousness. German butchers put this tender meat in a smoker and cooked it over low, indirect heat, creating what’s known today as Texas barbecued brisket.

By 1910, Texas barbecued brisket was on the deli menu and by the late 1950s, it was a favorite selection at restaurants throughout the state.

Get the King of the Smoked Meats at Smokey Mo’s

Brisket continues to be the king of the Smokey Mo’s menu – moist, fresh-cut, and smoked to perfection!  Stop by one of our 16 central Texas restaurants throughout central Texas.  Dine-in, carry out, or call or click in a delivery from Door Dash or Uber Eats.